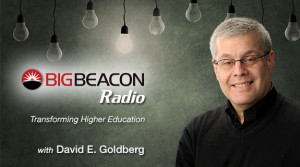 Ep. 5 –The  Future and Transformation of Higher Education Funding

Since the founding of the University of Bologna in 1088, non-profit universities and colleges have dominated the landscape of higher education. With the rise of for-profit universities such as the University of Phoenix, of non-traditional non-profits such as Southern New Hampshire University, and of coding schools and other certificate schools, the door has opened to other forms of higher education powered by start-up entrepreneurship and venture capital. In this episode, Big Beacon Radio host Dave Goldberg interviews higher ed venture capitalist, Daniel Pianko. In a series of recent articles, Pianko has challenged the practice of large gifts given to traditional universities & he urges wealth creators of our times to give to or use their entrepreneurial skills to build educational institutions that can effectively disrupt the status quo. Join Daniel & Dave for this critical and creative examination of the future of funding of transformation in higher education.