Blog
You are here: Home1 / Blog

As an engineer and engineering educator, I have devoted decades of considerable reflection and study to better understand the distinction between engineering science and practice, but in recent days it has become clear that the media, certain politicians, certain medical professionals, and much of the public at large is profoundly confused about the difference between science & practice, more generally.  Normally, this confusion is merely amusing or annoying to those of us who make our livings riding the edge of the science-practice distinction, but in the era of COVID-19, the misunderstanding is, in my view, leading to bad political decision making which is hampering effective medical practice thereby possibly causing unnecessary illness & death from the disease.

Yankees catcher and manager, Yogi Berra, made the distinction between theory and practice quite well in one of his Yogisms:

In theory, there is no difference between theory and practice.  In practice there is.

Like many Yogisms, this one creates an irreconcilable puzzle that invites a deeper dive to fully fathom the phrase.  Fortunately, in 1983, Donald Schoen at MIT, published an important text The Reflective Practitioner, that offers some help in this regard.

In The Reflective Practitioner, Schoen says that there are 2 approaches to thinking about practice.

The first of these notions of practice, technical rationality, is the one taught in professional schools these days in which theory is taught first and and then later (sometimes, much, much later) applied in practice.  The idea is simple.  Practice is merely the application of well known and accepted theory.  As I have written in A Whole New Engineer and elsewhere, this idea is OK as a theory of practice when we confront a known problem, because existing theoretical knowledge gives us particular guidance; however, technical rationality is a really lousy theory of practice because it offers almost no guidance when practitioners face an unknown or unsolved problem.

In such circumstances, Schoen observes practitioners in action (architects, therapists, and even scientists), and notices something important.  When faced with unknown or unsolved problems practitioners engage in reflection-in-action calling on their theoretical knowledge as well as their practical experience to try to put together possible ways to deal with the unknown situation.

He calls this process reflection-in-action and calls out its conversational nature.  The importance of conversation to this kind of creative problem solving is especially important.  In particular, it is important to notice, listen and question to deepen one’s understanding of the unknown problem and possible solutions.

A key element of reflection-in-action is to notice, listen, and question (NLQ) to your client/patient’s stories.  Media pundits are quick to dismiss anecdotal evidence as unscientific, but taking a good case history is central to great practice.  Great practitioners notice their individual patients/clients, their language, their symptoms, ask probing questions, listen, notice and question some more.

HCQ Cocktail as a Case Study in Proper Science & Practice

I am not a medical practitioner, but as a layman, it appears to me that the results in France, South Korea, China and the US suggestively pointing to hydoxychloroquine (and chloroquine) and azithromycin, the so-called HCQ cocktail, as being helpful in certain cases of COVID-19 is an important case to understand from the practice-science perspective.  There are three perspectives to consider:

Unfortunately, Governors Witmer (of Michigan, my state) and Sisolak (Nevada) have issued executive orders forbidding individual medical practitioners from prescribing the HCQ cocktail for their patients.  They do this on “science” grounds, but their actions show that they misunderstand science and practice both.  Prohibiting old, well established drugs from being used off-label in an emergency on scientific grounds is itself unscientific.  In essence, in the face of unknown harm of COVID-19 to particular patients, both governors are prohibiting the use of old, safe drugs with known side effects from being used by experienced practitioners to help their patients in need.  This makes no sense scientifically or as a matter of practice.

To better understand the malpractice here, imagine that S. Korean researchers found that a combination of rice pudding and bananas was effective in treating COVID-19.   If Governors Whitmer and Sisolak were logically consistent with their HCQ prohibition, they would prohibit Michiganders and Nevadans from eating rice pudding and bananas because of the lack of scientific evidence for their curative effect.

Moreover, given that practice is fundamentally conversational, prohibitions by central authority essentially shut down little bets and conversation between informed practitioners that can benefit their patients.  In this way Governors Whitmer and Sisolak commit a form of egregious political malpractice in their actions.   I urge them both to rescind their orders and let medical practitioners practice the medicine for their individual clients as best they can in difficult circumstances

Elsewhere, I have advocated for a better understanding of the science-practice distinction in the education of all professionals.  In the current environment, it is important to keep this distinction in mind and avoid needless loss of life through the prohibition of possibly lifesaving treatments lawfully available to medical practitioners.

Moreover, media pundits and politicians would do well to stop worshipping at the false altar of science  and recognize the science-practice distinction as important.  We need science and practice, both, right now as we face the challenges of COVID-19 in medicine and as a polity.

In recent months, Dave Goldberg has been doing some exciting work in Colombia with UniAndes. In order to better reach their colleagues, Chapter 4 of A Whole New Engineer has been translated into Spanish. If you would like to access and share this translated chapter, you can do so here: http://ciie.utn.edu.ar/libro/

“The last time I personally looked for a job was some 29 years ago when in 1990 I applied to a dozen universities for a tenured faculty position in engineering…I recall this history, because that 1990 search was of a different era. A few of the applications were sent by email, but many of them were submitted through the Post Office (!!?) as printed documents, and it was largely a person-to-person old-fashioned kind of search that was common decades ago. Thus, it was with some trepidation last week that I volunteered to work with a close relative (call her Andrea) to help her find a job in the age of online applications (Monster, Indeed, ZipRecruiter, etc.).”

“A shift is a small change to something we already do well that gives great power to effect change in ourselves and/or others.

And in this definition lies the blessing and the curse of shifts. Shifts are changes to things we already do reasonably well. For example, our ability to listen can be shifted to give us much greater power in conversation, but when you ask someone to consider making a change to how they listen, it can be difficult to even get their attention. “Oh yes, listening,” they’ll say, “I’m already a great listener,” and the person turns off to the very idea that there is something to learn here.”

Learn more about the first key Shift in a new blog post by Dave Goldberg here.

“Some of the earliest learning of the iFoundry adventure led to a key insight of what’s missing in education today. Other insights have come from coaching, training, and consulting interactions. All were combinations of theory and practical insight. Here we use the term shift to denote a small change to something we believe we already do quite well. ”

Discover the 5 + 1 shifts in a new blog post by Dave Goldberg, here.

“Expert this and expert that. If you listen to modern advertising copy and the media (and to university professors) the most important thing in the world is to become an expert, but something funny happened on the way to the expertise forum…”

Delve into the modern world of expertise in a new blog post by Dave Goldberg here.

“It’s time for university leaders to get serious about changing the way they teach students, says higher education thought leader Dave Goldberg, in this episode. Dave says it’s time to change higher education from the inside out. He says that, in preparing students for their careers, educators should help students shift their focus away from obedience to authority, and, instead, guide them towards the development of human values. The change in the teaching of students should resemble the way that the job of leadership is changing…”

4 Reasons Why “Everybody Needs a Coach” 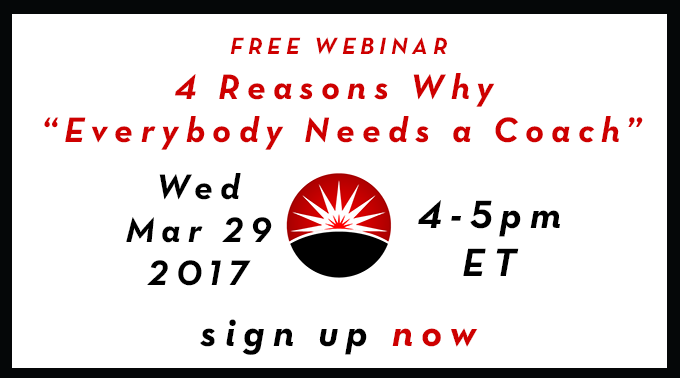 Business leaders, Eric Schmidt and Bill Gates say that “everybody needs a coach”, and the C-suite, (CEOs, CFOs, CTOs, etc.) increasingly hire leadership coaches to help them navigate difficult business problems. This practice is now spreading to other leaders, educational leaders, faculty members, and even students. This short, interactive webinar gives 4 ways coaching can help you in your work.

You will come away learning:

1. Coaching is not what you think: It is not advice giving by a smarty pants know-it-all.

3. Coaching is a form of humble inquiry in which the coach asks powerful questions and the client reflects deeply on possibilities, values, goals, and desirable results.

4. Learn the four ways coaching can help you in your work.Learn the 4 common mistakes of educational change efforts and how to overcome them.

Big Beacon is a 501c3, non-profit organization dedicated to the transformation of education. This webinar is free with no cost or obligation. but with plenty of opportunities for successful educational change.

to learn more about bringing more joy to engineering education.

Success! Thank you for your interest. We will be keeping you informed of any upcoming opportunities to explore bringing more joy to engineering education!